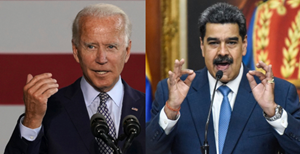 In the first renewal granted under President Joe Biden’s administration, the U.S. Treasury Department extended until Dec. 1 its authorization for Chevron, Halliburton Co., Schlumberger Ltd., Baker Hughes Co. and Weatherford International Plc to conduct business that’s essential to preserve their assets, protect employees and reimburse contractors. The previous deadline was June 3. Since last year, the companies have been barred from any activity related to producing oil.

Venezuela, home to the world’s largest crude reserves, has seen its once-massive oil industry collapse under the sanctions imposed on Maduro’s regime. Though crude prices have surged as the global economy begins to recover from the Covid-19 pandemic, oil production from the South American country has barely risen.

The reprieve comes amid moves from the Maduro regime that could lead to an eventual thawing of tensions between Washington and Caracas. Maduro reached an agreement to allow the United Nations World Food Program to start operating in Venezuela and moved American Citgo Petroleum Corp. executives from prison to house arrest, while Venezuela’s congress approved a new electoral board that includes Maduro opponents. Opposition leader Juan Guaido in May proposed gradually easing sanctions as an incentive for Maduro to schedule free elections.

Chevron first set foot in Venezuela in the 1920s and has since become one of the largest private oil companies operating in the country. It’s a partner of Petroleos de Venezuela SA in four oil ventures which in 2019 produced 34,000 barrels of crude oil.

The U.S. ratcheted up sanctions against Caracas in early 2019 by imposing a de facto ban on PDVSA followed by sanctions on two Rosneft PJSC subsidiaries and multiple lesser-known companies helping the country to export oil. The OPEC founding member currently produced 445,000 barrels a day in April, about 20% of what it used to produce five years ago.

Tips to become eligible for the FFMC License
Rethinking your career during the COVID-19 pandemic? You’re not alone
Shell to buy BP’s share of Shearwater North Sea gas hub
Ditching your mask? 4 of the best products for whitening your teeth, according to reviewers