Crude oil prices held gains during Wednesday’s APAC session, trading near two-and-half year highs. Risk appetite was revitalized after a lab report showed that Moderna’s Covid-19 vaccine is effective in producing antibodies against the Delta variant – a newly found viral strain from India. Yet, questions remain on the production capacity and distribution of Moderna’s vaccine as viral strains continue to spread and mutate.

The Delta variant was attributed to the recent surge in Covid-19 cases in the UK and Australia, threatening a new round of lockdowns and travel restrictions around the world. This may cast a shadow over the recovery of global energy demand, especially among countries that have relatively slow vaccination progress. A worsening pandemic situation may limit upside potential for crude oil prices.

Meanwhile, OPEC+ will meet to discuss easing production curbs further in August to meet rising fuel demand. A Bloomberg survey shows that the oil cartel may increase output by 550k bpd in August, which is only a fraction of an estimated global supply shortfall of 3 million bpd. Therefore, tight market conditions may warrant a slow and gradual output increase without causing significant price volatility.

The oil cartel and its allies have slashed production by more than 5 million bpd since the onset of the Covid-19 pandemic. During a April meeting, OPEC+ decided to lifted output cuts by 2.15 million bpd from May to July as demand rebounded sharply (chart below). 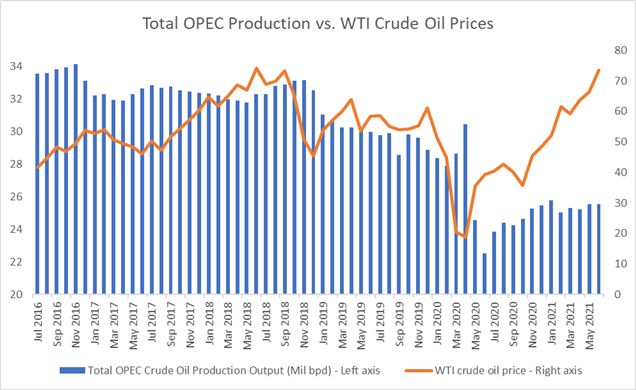 The American Petroleum Institute (API) reported an 8.15-million-barrel draw in crude inventories for the week ending June 25th, compared to a 4.68-million-barrel decline forecast. This also marked the 6th consecutive weekly decline in stockpiles, hinting at tightened market conditions as refiners geared up capacity to meet demand for the summer driving season.

The Energy Information Administration (EIA) will publish its weekly petroleum status report later today, with a 3.85-million-barrel draw expected. A larger-than-expected fall in stockpiles would likely strengthen prices, whereas a smaller draw or a rise may lead to the reverse. 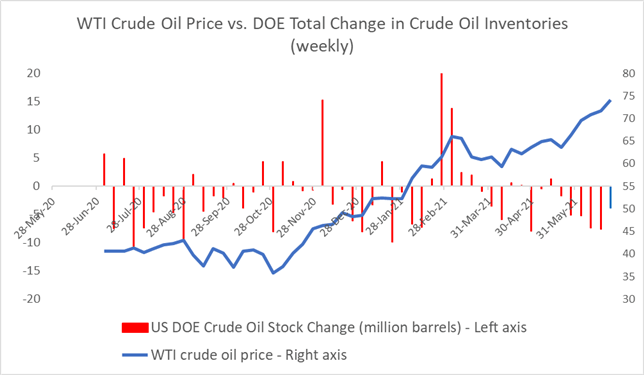 Technically, WTI is challenging a key resistance level at $73.5 (268.2% Fibonacci extension), breaching which would likely open the door for further upside potential. The overall trend remains bullish-biased, albeit selling pressures may be seen at around the resistance level. An immediate support can be found at $70.0 – a psychological level. The MACD indicator is about to form a bearish crossover, suggesting that bullish momentum may be fading. 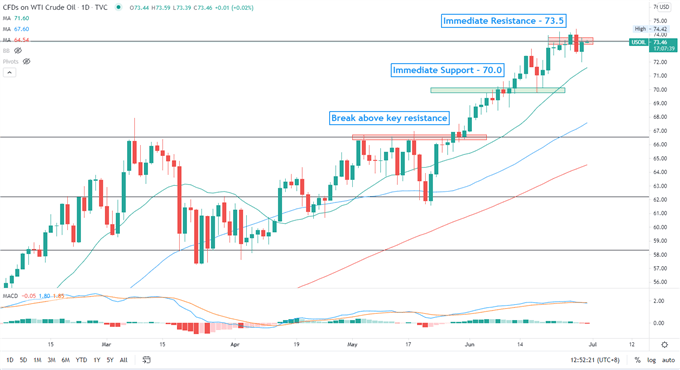