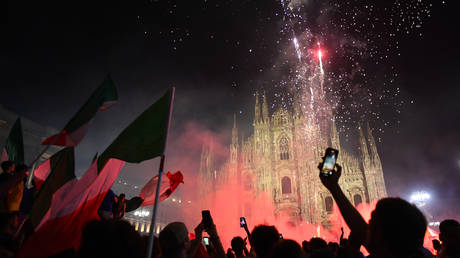 Wild celebrations have erupted across Italy and beyond after the country claimed the European football championship trophy for the first time since 1968, defeating England 3-2 in a penalty shootout.

Thousands of football fans have taken to the streets of Rome, Naples, Milan and numerous other cities all across Italy on Sunday night, after their team upset England in a dramatic penalty shootout following a 1-1 deadlock and extra time at Wembley Stadium, London.

Dozens of fireworks illuminated the skies of Naples, with no signs of celebrations winding down any time soon.

In Milan, ecstatic fans were seen jumping on top of trams and burning flares.

The joy reverberated not only across the country but around the world, reaching as far as Australia. Hundreds of fans who watched the nail-biting Euro 2020 finals in Melbourne’s Italian precinct exploded in celebrations once their team claimed the victory.

Here Is Why The GOP Embrace Of Trump Is Likely To Fail In 2022
"We Can't Leave This to the Whims of Mitch McConnell"
Why I Chose Family Law Over Business Law | Black Writers Week
'Case Closed': Serbian Officials Silent After Russia Blamed For 'Ecstasy' Attack On Teen In Belgrade