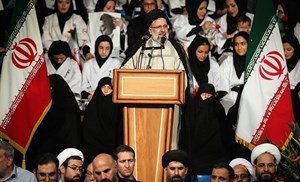 (Bloomberg) – Ultraconservative cleric Ebrahim Raisi swept to a landslide win in Iran’s presidential election, potentially setting Tehran on a more hostile course toward the West as world powers attempt to revive a nuclear deal that could see it return to global oil markets.

While the 60-year-old’s ascension could complicate efforts to revive a 2015 accord to limit the Islamic Republic’s atomic activity, it’s not expected to derail them because they have the blessing of Supreme Leader Ayatollah Ali Khamenei. Raisi, who was elected after the lowest voter turnout in Iran’s history, is seen as a favorite to one day succeed him.

A former judiciary chief with support from the highest levels of Iran’s religious and military establishment, Raisi’s election means that all of Iran’s state institutions and levers of power will be controlled by hardliners. This comes after the eight-year presidency of moderate Hassan Rouhani, who helped seal the original nuclear deal that former U.S. President Donald Trump withdrew the U.S. from in 2018.

“We will certainly tap the experience of the current government,” Raisi said in a state television address standing next to Rouhani after results came in. “I will sit down with the ministers and use their experience and views.”

Foreign Minister Mohammad Javad Zarif said “the foreign policy of Iran, which is based on consensus, will continue,” after results showed Raisi securing 62% of ballots cast with most votes counted. While Raisi has said he would preserve the nuclear deal, he’s also indicated he doesn’t want to make it Iran’s central foreign policy concern.

Rouhani remains in office until August, giving diplomats in Vienna a few more weeks to revive the nuclear deal that lifted penalties on Iran’s economy. Those deliberations are now likely to extend well into the summer, two senior Western officials familiar with the process told Bloomberg News on Thursday, while Zarif said there was “a good possibility” of an agreement before the end of Rouhani’s term.

The U.S. exit from the deal empowered hardliners and principlists in Iran, who were always critical of the agreement and won control of parliament last year. Millions of voters stayed home from Friday’s election after most moderate and reformist candidates were disqualified from running.

“Apathy seems to be the problem. What was the reason for apathy? You will see differences of views in Iran,” Zarif said.

Raisi was sanctioned in 2019 by the Trump administration, which cited his role in a deadly crackdown a decade earlier on protesters alleging vote fraud. He secured 17.8 million votes according to results on Saturday, while the only moderate candidate in the race, Abdolnaser Hemmati, came third with 2.4 million ballots. Turnout was 48%, the lowest ever, according to figures from Jamal Orf, head of Iran’s presidential election headquarters in a statement on state TV.

Officials with strong security ties from the presidency of Mahmoud Ahmadinejad, who served before Rouhani, could be also asked to run Iran’s oil ministry. A hard-line shift there may complicate potential future relationships with European oil majors such as France’s Total SA, which abandoned a $5 billion project under the threat of Trump’s sanctions, and pivot instead to Russian and Chinese developers and the Guard’s own engineering firms.

Washington’s withdrawal from the nuclear deal sent tensions soaring in the Persian Gulf, fueling regional conflicts and prompting Tehran to abandon constraints on its nuclear program contained in the pact and to enrich uranium close to the level needed for a bomb.

It’s less clear what Raisi will mean for Iran’s policies in the region, especially its troubled relationship with Sunni rival Saudi Arabia. His proximity to the Islamic Revolutionary Guard Corps means his presidency could strengthen their footprint on the economy, though, and their influence on foreign policy decisions.