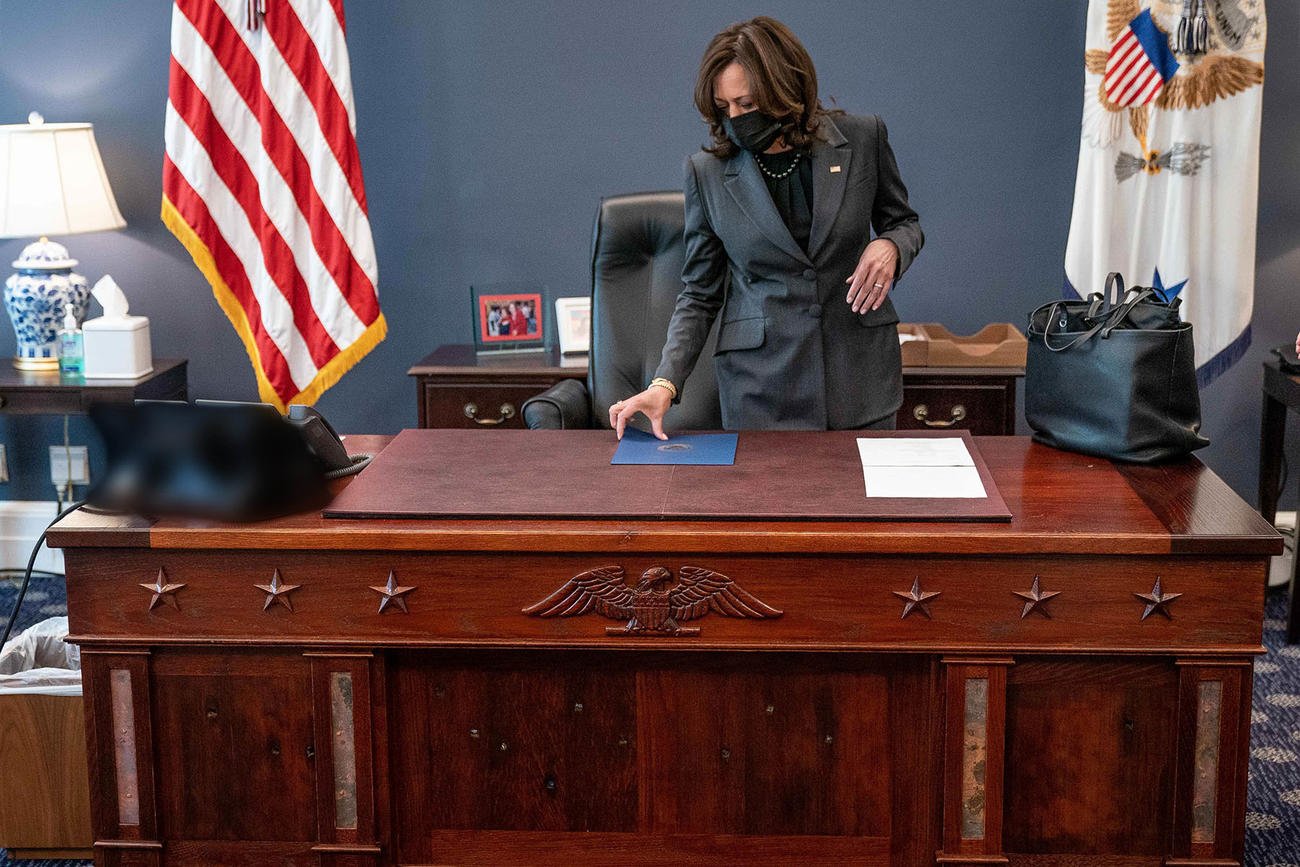 The vice president and Navy secretary now have new desks built out of materials from some of the most storied ships in U.S. history.

Navy Seabees built a desk for Vice President Kamala Harris made from wood, copper and nails taken off the USS Constitution, one of the country’s first frigates. The Constitution is the oldest commissioned warship still afloat.

The desk, which was delivered to Harris in February, features carvings of an eagle and stars reminiscent of the Constitution’s stern decorations, said Paul Taylor, a spokesman for Naval History and Heritage Command, which oversaw the project. The project was approved while President Donald Trump was still in office, and Seabees began construction Jan. 4.

Harris’ new workspace is one of two “heritage desks” Seabees constructed this year. Sailors also built a desk for the Navy secretary that not only includes materials from the Constitution, but from the frigate Chesapeake; battleships Texas, New Jersey and Arizona; and sloop of war Constellation as well.

That project began under former Navy Secretary Kenneth Braithwaite, who had the idea for the desk. It was completed after he left the position, so the desk was received by acting Navy Secretary Thomas Harker. Braithwaite was able to see the completed desk before it went to the Pentagon during a visit to the Washington Navy Yard, where it was constructed, according to the Heritage Command.

Navy Builder 1st Class Hilary Lemelin, who’s assigned to the Constitution, said it was amazing to create a desk for those making big decisions for the Navy and country.

“The importance of their job can affect everything we do,” Lemelin said in a statement about the project. “It’s a piece of history now.”

The wood from the Constitution was removed during two restorations that ran between 2007 and 2017, Taylor said. A drawer on the Navy secretary’s desk features pen trays with a piece of the Arizona, which sank in the 1941 attack on Pearl Harbor.

The steel remnants from the Arizona were donated to the Navy through Chief Fire Controlman Lauren F. Bruner, the second-to-last sailor to leave the Arizona on Dec. 7, 1941, and the last survivor to return to the ship on Dec. 7, 2019, Taylor said.

That desk also features copper inlay from the Constitution that replicates the anchor and stars on the Navy secretary’s official flag.

“Each of these historic warships, like so many other vessels throughout the history of the Navy, embody the honor, courage, and commitment of those who served in them,” Taylor said. “More importantly, the desks will be lasting reminders to our civilian leaders that today’s Navy and our diverse sailors and Marines are deployed forward — alongside our allies and partners — to deter aggression and preserve freedom of the seas.”

Wood, steel plating, copper, nails, beams and deck bolts from the other ships used to build the Navy secretary’s desk were donated by museum managers, foundations and ship owners.

Taylor said there are no plans to build more heritage desks right now, but didn’t rule out the possibility of future projects.

“When the wooden-hulled mine countermeasures ship USS Chief … is eventually decommissioned, how cool would it be to construct an executive desk from her timbers for the Master Chief Petty Officer of the Navy?” he said.

Related: The Navy Is Naming its Next New Frigate USS Congress