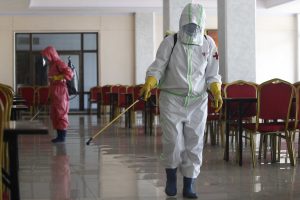 Restaurant staff, in protective suit, disinfect the floor of Chongchun Restaurant in Pyongyang, on Thursday, May 13, 2021.

Even before the COVID-19 pandemic hit, North Korea had a reputation as one of the most (if not the most) isolated societies on Earth. It was as if North Korea was already living under the conditions of a permanent COVID-19 lockdown. Indeed, it was hard to imagine that the hermit nation could get any more reclusive than it already was. Yet with COVID-19 raging all over the world, North Korea seems to be rolling down the path of new unprecedented levels of isolationism. Why is this happening and what will the consequences be?

The government’s COVID-19 measures became a key trigger of the North Korean iron curtain becoming almost impenetrable. Already in late January 2020, North Korea moved quickly against the virus, when other countries were still discussing what measures should be taken, if any. The borders were completely sealed off. All tourists were prohibited from entering; those already in the country were kicked out. All other foreigners residing in North Korea were put under a one-month quarantine. This rule applied to the staff of local embassies and international organizations. Some said they were literally locked out in their buildings despite the fact that they had arrived in North Korea way before the pandemic.

Pyongyang’s paranoia is barely surprising. North Korea is well known for taking pandemics very seriously – similar measures were taken against Ebola and SARS, which were not as contagious and transmissible. North Korea is ready to make any economic sacrifices prevent COVID-19 from penetrating the country. The North Korean leadership understands that once the virus arrives, their country’s healthcare system will simply collapse. Even Kim Jong Un himself openly admitted that there is no fully fledged medical infrastructure in North Korea that meets modern requirements and is capable of dealing with the pandemic. Hence, hermetically sealing itself off from the outside world was the only rational choice the North Korean government had.

Of course, the elites understand the economic costs of their decisions, but they also saw some potential political benefits similar to many other authoritarian regimes. After all, any new restrictions could now be explained by the necessity to combat the pandemic. For example, these days movement across the North Korean border is impossible – which means no defections, no migration, no dangerous external information coming from abroad. That allowed the government to take back control over the unravelling ideological system, which was not entirely invulnerable to external influences. For example, new censorship measures have been imposed after Kim ordered the Youth League to crack down on any “non-socialist behavior” amongst the youth. There are also stricter border restrictions, preventing the external information from getting in. Extra cordons with armed security guards have been installed along the land borders of North Korea in order to prevent anyone and anything from entering the country. Every single product that entered North Korea in 2020 was thoroughly checked and paranoidally disinfected, while most goods were not even allowed to come in. Thus, it is almost impossible for a North Korean to lay hands on a South Korean TV drama these days.

Surprisingly, South Korea also contributed to the North’s isolation as well. It did so by cracking down on the human rights activists who launched balloons across the Korean border. The activity, which greatly annoyed Pyongyang, was banned in 2020 under South Korean law. Violators face up to three years in prison, or a $27,400 fine. While the exact degree of effectiveness of these balloons is not entirely clear, they have been successful at reaching the population living right across the border, according some testimonies from North Korean defectors. From that perspective, the South Korean anti-leaflet law effectively deepens North Korea’s isolation from the outside world.

There are disturbing signs of isolation in the economic field too. For years, Kim Jong Un was slowly pushing his country toward market-oriented reforms, but this changed with the pandemic. The government is now desperately trying to put an end to the country’s dependence on imported materials and equipment in producing basic goods. For instance, according to the Russian Embassy, both of North Korea’s metallurgical plants are installing equipment for coke-free iron smelting, as the country has no coking coal. Moreover, construction of C1 chemical plants is being expedited, allegedly with the goal of helping North Koreans to make liquid fuel from the country’s abundant brown coal reserves. It is unclear how fruitful these efforts will be, but the mere discussions are quite telling. The official party line on centralization and isolation was proclaimed in early 2021 during the Eighth Congress of the ruling Workers’ Party of Korea. This approach could also contribute to the aforementioned political goal of strengthening the ideological control over society’s life. Stronger oversight over the country’s economy could limit the internal circulation of illegally smuggled South Korean dramas, pop music, banned books, and other materials.

No positive signs can be observed on the diplomatic front either. Pyongyang recently dropped out of the Tokyo Olympics; abandoned the 2022 World Cup qualifiers after citing potential coronavirus effects; and banned its delegations from leaving the country – all in the name of combating pandemic. Yet North Korea does not show great willingness to engage with anyone diplomatically either. It has largely ignored the Biden administration’s attempts at diplomatic outreach, while occasionally insulting South Korean President Moon Jae-in or rejecting his proposals for inter-Korean cooperation with great disdain.

Get briefed on the story of the week, and developing stories to watch across the Asia-Pacific.

North Korea is getting increasingly isolated. But why does it matter?

First, there is a basic humanitarian dimension to the problem: The North Korean people are suffering as a result. This isolation negatively impacts the country’s economy and especially trade, as Russian diplomats confirmed in the spring of 2021. Pyongyang’s levels of trade with China plummeted by 80-90 percent throughout 2020. According to some local embassies, buying such basic goods as pasta, flour, vegetable oil, or sugar has become challenging even for them. There are also no decent clothing items or footwear available for sale. Many enterprises came to a standstill, and people lost their jobs, because there are no imported materials or resources. Rumors of potential famine outbreaks have been circulating almost non-stop, although they have not been confirmed.

Second, North Koreans experience less and less contact with the outside world, which further limits the information flow and strengthens the hand of the Kim regime. When we look at the historical examples of communist regimes like the Soviet Union or its Eastern European satellites, rare interactions of their peoples with the Western world as well as other types of penetration of the information from the outside were the key factors of subsequent transformation of these regimes. Thus, today’s limitation of North Korea’s interactions with the outside world is detrimental to the cause of its people’s freedom. Unfortunately, the last link connecting North Korea with the international community are the 13 foreign embassies remaining in Pyongyang. Yet even that link is becoming tenuous. Considering how strict and sometimes absurd the North Korean quarantine rules are, an exodus of diplomats and employees of international organizations continued throughout 2020-2021. Very symbolic was a picture of several Russian diplomats departing from North Korea on a rail trolley built especially for a one-way exit in February 2021. For now, it is unclear when Pyongyang will let more diplomatic personnel, humanitarian workers, and business people into the country again.

Finally, accurate information about North Korea has always been scarce – now the situation is even worse, with the numbers of defections and people travelling to and from North Korea falling to essentially zero. Diplomats, humanitarian workers, as well as other foreigners could provide unbiased coverage of what was actually happening in the country; now those sources are even rarer. This lack of information would further hinder research activities as well as informed policy decision making in Seoul, Washington, and other world capitals when it comes to dealing with North Korea. For example, if the socioeconomic situation were to start deteriorating drastically and result in another famine (which is very unlikely but still possible), the international community would not be able to quickly determine the scale of the problem. The departure of the World Food Program and other humanitarian organizations means that if North Korea needs extensive food aid, setting up distribution systems from scratch will be very hard.

To end on a positive note: not everything looks so gloomy. Apparently, Pyongyang is seeking new opportunities to restart trade with China. The borders have started reopening for goods as North Korea continues with the construction of the large disinfection facilities at the border checkpoints with China and Russia. This could somewhat help to alleviate the fragile humanitarian and economic situation in the North. Unfortunately, the political and social ramifications of this isolationist trend are likely to be long-term, especially since Pyongyang is not one of the first candidates on the list of countries to receive COVID-19 vaccines from the World Health Organization’s COVAX initiative. Thus, as the pandemic continues, we will have to find new ways of exposing Pyongyang to the outside world and promoting positive societal change in North Korea.

Biden Says U.S. War in Afghanistan Will End August 31
With Disasters Mounting By The Day, The U.S. May Finally Enact Real Climate Policy
There is No ASEAN Consensus on Myanmar
Sri Lanka detects first community case of Delta variant of coronavirus