#PLURV – the German #FLICC – getting popular in Germany

Longtime readers of what we are up to at Skeptical Science will be well aware of the FLICC taxonomy first suggested by Mark Hoofnagle in 2007, written about in Diethelm & McKnee (2009) and since then greatly enlarged by John Cook:

A much simpler FLICC-taxonomy first started out to be utilized in our MOOC Denial101x where it was used to explain and highlight the techniques used to distort the findings of climate science research. But even then it was pretty clear, that taking this kind of approach could be applied not just to climate science but to many other (science) areas. Right from the start of our MOOC we’ve had a section in our discussion forums asking the students to come up with FLICC-examples from other areas.

How well and across board this type of logic-based inoculation could be applied, has become readily apparent when the Corona-pandemic hit in early 2020. John Cook started to publish cartoons and videos using FLICC to explain the many flaws found in the misinformation spread about the Corona-virus and the pandemic. When the SciBeh-Project put together The COVID-19 Vaccine Communication Handbook, they included a section with examples of misinformation and how to debunk it with pointing to the FLICC fallacies: 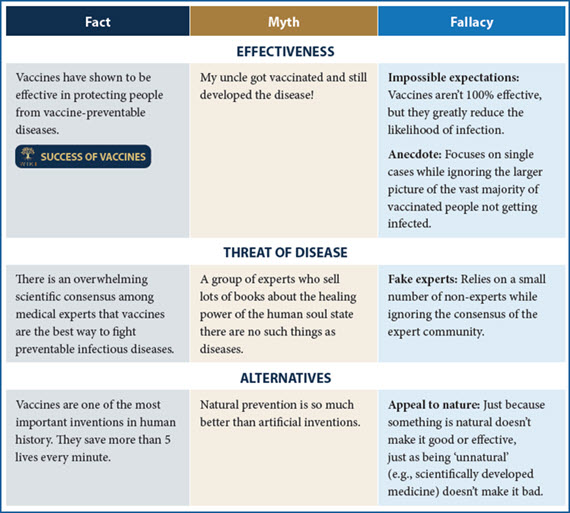 Last year our German-language partnersite klimafakten.de decided to create a poster in order to make more people aware of the main techniques used in science denial. So we needed to come up with a good German equivalent for FLICC and after some discussions we ended up with PLURV (there’s now also PLOKS for Dutch). The poster turned out to be very popular and it was shared a lot on social media – especially Twitter – when it first came out. Since then, considerably more than a thousand posters have been sent to individuals, doctors, schools and many more. So, this wasn’t just a one-hit-wonder so to speak! Instead, there were regular blips whenever the hashtag #PLURV started to show up on Twitter, linked to some of our content. These activities resulted into renewed interest every now and then in some of our translated articles and the spikes are readily visible in these snapshots from Google-analytics for three PLURV-related pages in German, the taxonomy with definitions, the history and the poster (mind the different scale shown on the left, though & klick for larger version):

What were the most likely triggers for these spikes, especially the ones in April 2021 and the much smaller ones in December 2020? From what we can tell these were caused when somebody on Twitter started sharing the PLURV-poster in connection with COVID-19 misinformation. For April 2021 we are fairly certain, that it’s directly linked to German virologist Dr. Christian Drosten explaining PLURV in his very popular weekly podcast about the Corona-virus on March 30. Here is one of the first tweets mentioning the episode and #PLURV explicitely I found. Since then, you’ll find many tweets using the hashtag #PLURV – although I obviously haven’t checked if it’s properly used in all cases! We however do know that what started out as FLICC in English is currently very popular as PLURV in German! I’ll leave you with this creative application in the truest sense of the word (as found in this tweet):

Russia Pledges Support For Tajikistan Amid Concern Over Afghanistan