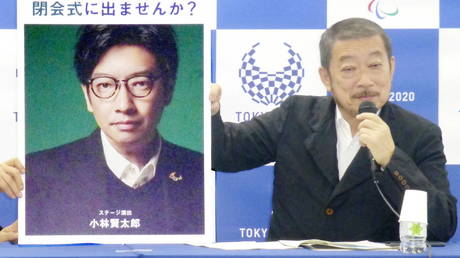 The director for the opening ceremony at the Tokyo Olympics, comedian Kentaro Kobayashi, has been terminated just a day before the games kick off, after a 1998 comedy sketch surfaced in which he joked about the Holocaust.

Olympic Organizing Committee president Seiko Hashimoto announced the move during a press conference on Thursday, saying Kobayashi had been fired and that officials would undertake a last-minute “review” of the opening and closing ceremonies, both of which were meant to be directed by the comedian.

“It has come to our notice that Mr. Kobayashi used comments that made fun of a tragic fact in history in his past performance,” Hashimoto said, but added that she would not resign over the scandal.

The controversial joke that landed Kobayashi in hot water came during a sketch performed with his comedy duo, the Ramens, where he reportedly made an off-hand remark about playing a Holocaust ‘game,’ though some Japanese-fluent netizens have disputed the exact context of the gag.

I watched a slightly longer clip, i think the context was he was getting out a box of (imaginary) dolls and said “ah, they’re from when we did that Holocaust reenactment! Boy did our producer get mad at us for that.” Very poor taste and don’t get why it got a laugh, either.

The Simon Wiesenthal Center, a Jewish rights group, condemned Kobayashi for the two-decade old quip, saying “Any association of this person to the Tokyo Olympics would insult the memory of six million Jews and make a cruel mockery of the Paralympics.”

Any person, no matter how creative, does not have the right to mock the victims of the Nazi genocide.

Also on rt.com
Tokyo Olympics chief resigns after proposing plus-size body-positivity comedian Naomi Watanabe as an ‘Olympig’ for the 2020 Games

The comedian is not the first Olympic staffer on the chopping block. In March, the games’ creative head Hiroshi Sasaki resigned after suggesting a plus-size entertainer set to perform at the opening ceremony could appear in pig ears, calling her an “Olympig.” Earlier this week, Japanese composer Keigo Oyamada, who was tapped to write music for the opening ceremony, also stepped down after interviews from the 1990s re-surfaced, in which he spoke of mercilessly bullying his high school classmates, including a disabled student.

The Tokyo Olympics have encountered a long series of troubles, having been postponed for a full year due to concerns surrounding the Covid-19 pandemic. Even with the opening ceremony set to kick off in less than a day, the “cursed” games could still face disaster, with the organizing committee warning as late as Tuesday that it still hadn’t ruled out cancelling the event altogether, citing lingering coronavirus fears.

Also on rt.com
Japanese composer pulls out of Olympic opening ceremony, amid outrage over bullying of disabled student